Hello everyone! It has been a few months since I have blogged but it has been a busy few!

Kody and I attended the Congressional Action Tour in Washington D.C. with our fellow YF&R committee members as well as the State Board. It was a great trip! We are so glad to be part of an organization that gives such fun and educational opportunities to us! We had an amazing time and got to see A LOT of beautiful monuments.

Harvest 2014 has come and gone for our families. It was a hard one for the Kinder side, as it was the first one since “papa Jim” had passed. He was always such a big part of the farm and the rock of the family. We got through it, though it was tough.

As for my family, it was a short harvest. Not many acres to cut, but it got done and the combines are back in the barn until next year!

Running water over a low crossing of Deep Red Creek.

RAIN! RAIN! RAIN!! We have got some rain over the last few months! The picture is just a few miles south of our house in Cotton County. It is Deep Red Creek. It was such a beautiful sight and sound to see so much water flowing in Southwest Oklahoma! Thank you Lord for the Water!

We continue to be busy with our jobs. Kody is still protecting Cotton County as Sargent for the Sheriff’s Department. I continue to work at FSA! We have our cattle program that is being offered right now, so that is what takes most of my time. I count cows and calves all day! It has sure been worth it to see the farmers smile again after the terrible years of drought!

We hope that you too are enjoying some water in your areas!

Swathing our canola into windrows

The end of May and beginning of June is a busy time here on our farm. We have started wheat and canola harvest! Before the combines get to rolling in the fields, there are many hours of shop work that must be done to make sure that everything runs as smoothly as possible when the wheat and canola are finally ready to go. This doesn’t mean that there won’t be breakdowns by any piece of chalk, though. Harvest and breakdowns are like peas and carrots, they just go together! Besides combines, there is the swather, the grain cart, tractors, headers, trucks and trailers that must be checked out to see if they are in good working order, too. Is it any wonder that our parts guys know us really well by the end of June?

Canola moisture was too high, so we switched to wheat

The few fields we have harvested so far this year are yielding below half of what we usually grow in the same fields. This is disheartening, but we are thankful to have anything at all to harvest. The drought has really hit us hard up here in Northwest Oklahoma. It is also a testament to the amazing plant that wheat is. Some of our farms had less than 3 inches of moisture during the entire growing season (October to early May). The fact that the plants even grew is amazing!

Thanks for allowing us the opportunity to grow a safe, nutritious grain and oil seed for you and your family. I will have more pictures and I’m sure a good story or two for next month!

You can follow along with many farmers across the country as they bring in harvest by searching/following the #harvest14 hashtag on Twitter. 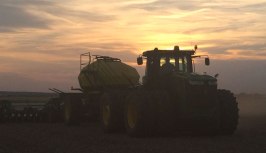 Clint planted some Milo in May. The old timers have a saying “Plant in the dust and the bins will bust”- we are hoping that holds true, we most definitely dusted it in!

May has sure had a “boat” load of surprises. Hobart has seen the most amount if rain  consecutively since probably 2008. We received 5 inches over 5 days – it couldn’t have more perfectly timed.

Summer crops were in the ground and are shooting upwards with the big drink they received.

Today, the last day of May, the first combines are rolling in the Hobart area. More pics to come. Praying everyone is blessed and has a safe harvest and summer. 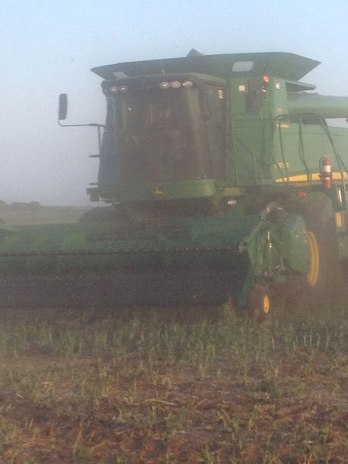 Combines rolling across the highway from our house. Our fields needed another day to dry that’s why our combines are sitting. 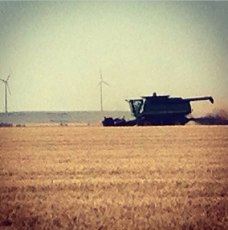 Porter family getting started today. They are a young farm family in Hobart good family friends.

Haze from wheat harvest hangs in the air with the local coop in the background.

The light tan spots in this field indicate freeze damage to the wheat crop.

For wheat farmers in southwest Oklahoma the proverbial rain has hit. Not only was there severe drought damage to the winter crops, but the late freeze on April 20 sealed the deal on failed crops.

In Hobart, temperatures were documented as low 22 degrees and we were under 28 degrees for 6 hours. In layman’s terms: a disaster.  Zac was with a crop adjuster all day yesterday and most of the day today.  Let’s just say it was a tough 48 hours in our home realizing that 80% of our main crop was not harvestable. Today Zac is swathing his Ruby Lee seed wheat – because the head is dead inside the stalk.

The problem we will be experiencing for the 2015 crop year is the significant loss of seed to plant for future crops.  But this is nature’s way of ensuring the strong will survive.  Our faith will remain strong in Jesus Christ, this isn’t the end but the beginning. He always provides!

On another note, Washington, D.C. legislative action tour was great.  Getting to hear from the Oklahoma delegation makes us feel like we could be a part of the only sane state in the U.S., trying to bring common sense back to Washington.

With the prospective light frost, we will see if the fresh milo that is coming up can survive.  This will definitely be a crucial year for many farmers. The wise ones will be here to farm another year and the not so wise might not be. It’s a make or break year in Oklahoma! This will take years for farmers to recover from the continuous drought we have seen.

A late snowstorm on April 14 and subsequent freeze raises questions about canola and wheat in 2014.

This is the scene in one of our canola fields this morning. We had a skiff of snow fall last night and this morning (April 14, 2014). While this is surprising, it’s not too unusual for us to have a little snow in April (last year it snowed a little on the 1st or 3rd of May). What makes this year’s late freeze so brutal is that our wheat has not had significant moisture since September of 2013 and the drought has stressed the wheat so much that it has literally went from a month behind to right on schedule in ONE WEEK! The canola is drought stressed also, but it seems to handle late freezes better than wheat does, generally speaking.

Getting the planter prepared to plant milo (grain sorghum) on failed canola.

On a more optimistic note, Clint has been getting our planter geared up and ready to plant milo on the acres of canola that froze out earlier this winter. Hopefully the weather will permit us to grow a good crop of milo. We were planning on planting Milo (also called grain sorghum) early this year, but with no moisture in the soil profile and a not-so-promising weather outlook we are probably going to push our planting itinerary back and pray for the El Nino they keep talking about this fall.

We did a little prescribed burning on a Bermuda grass field early this month. Burning off the old growth and “thatch” accumulation will help control weeds, allow the new growth to take off sooner, and allow us to harrow the field to make it smoother for us to cut, rake, and bale more efficiently.

When I started talking to Clint about what to write about this month I didn’t think I had much to write about, but looking back we’ve been pretty busy. I think we are just getting ready for the craziness that is May!

I think it’s safe to say March is leaving like a lion! Remember back to grade school when they told us that if March came in like a lamb it would go out like a lion? I think my first grade teacher Mrs. Rose was on to something there!

We have been very busy with our crop insurance business this month getting our farmers spring and summer planted crops insured, and short rating any acres of wheat or rye that they want to hay or graze out (harvest on the hoof). All the farmers I talked to out here in Western Oklahoma said the same thing; please send rain! I can definitely sympathize with them.

Farmers, ranchers (and their animals are ready for green grass again!

I checked the Mesonet on 3/19/14 before I spoke at the Dewey County Conservation Districts Annual Meeting/Banquet – it’s been 119 days since we have seen over .25” of rain in a single rain event here in Fairview! As bad as that sounds, it’s been 150+ days in many other places across Western OK. No wonder our wheat price is up… As the wheat has started to break dormancy and grow, more and more blue tint is showing up in fields. This is not a good sign – it means that the moisture needed to grow the plants is in short supply. The fields of Canola that escaped this brutally cold winter are also starting to really green up. Canola seems to do a little better job finding the moisture in the subsoil than wheat does, but it could use a drink too.

Spring calves on the Wilcox farm.

We are over halfway done with our spring heifers calving. It’s been a mostly uneventful calving season so far – and that’s just fine with us! I can attest to the fact that there really isn’t much in life cuter than calves.

We are hopeful that rain will soon start falling on our farms and fields, but if it doesn’t we know that it isn’t in our control and it’s just another bump in the road of farm life. Happy Spring y’all! 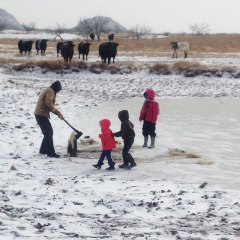 Zac and the kids chopping ice as cows wait for a drink.

All living things must have water. Humans can live up to 10 days without food, but only 3 days without water!  Early in February, we struggled with extreme cold temperatures and as good stewards of God’s creation (farmers and ranchers), we must under any condition care for the animals.

When water troughs and ponds freeze up we must do whatever is necessary to get our animals water.  Most of the time this just includes “chopping ice” with an axe until we reach water.  This is a daily occurrence.

Because of the extreme drought western Oklahoma has faced, we are using solar pumps to pump water from 50-year-old wells into troughs.  The big concern with that is when it gets so cold outside the water in the wells freeze up.  Then our only option is to “haul water” in trailers to cattle.  So far we have been blessed to either move cattle to different pastures that had deeper wells or the ponds on a few places still had some water.    Hope you enjoy the pictures of our family “chopping ice”.  The kids really enjoy this time with dad!

Brushing the snow off a pond to find the best place to chop ice. 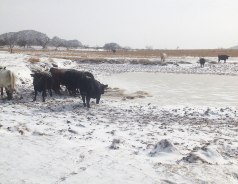 Cattle gather around a chopped hole in a pond to get a drink.

A chunk of the ice chopped away from the pond. You can see the thickness of the ice.